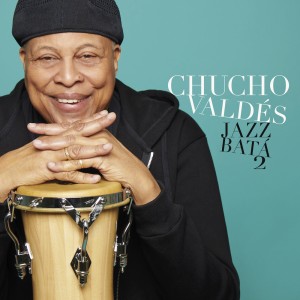 With Jazz Batá 2, Cuban pianist Chucho Valdés returns to the small-group format that he used for his 1972 album Jazz Batá. Recorded with just piano, bass and batá drums, Jazz Batá heralded the later success of Valdés’ group Irakere, an Afro-Cuban big band that forwarded the evolution of Latin jazz, exponentially.

On Jazz Batá 2, Valdés pays a musical debt to his father, Ramón “Bebo” Valdés, one of the most influential Cuban big-band leaders of the 20th century. To honor what would have been his father’s 100th birthday, Valdés offers up his arrangement of “100 Años De Bebo,” a danzón mambo melody written by the elder Valdés, alluring in its movement and touching in its simplicity.

Elsewhere, Valdés draws inspiration from the jazz avant-garde, Cuban religious myths and European classical music. Against the dynamic rhythms of Cuban composer Enrique Ubieta’s “Son XXI,” he plays a kinetic, free solo line. On the mini-suite “Obatalá,” he invokes a Yoruban god through beseeching vocals and a rhythmic pattern connected to the deity. And on “The Clown,” a solo piano piece, he references the impressionistic works of French composer Maurice Ravel. Throughout all of the tunes on the album, though, the batá grounds Valdés’ playing in a specific cultural context, even as his jazz vocabulary speaks to a broader musical world.