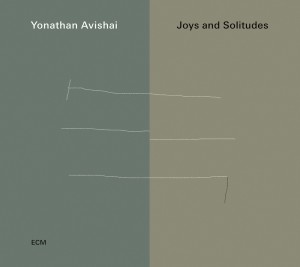 Pianist Yonathan Avishai is one of the more gifted musicians to have emerged recently from the French jazz scene. Born in Tel Aviv, the pianist moved to the Dordogne region in 2000 and has been based in Paris for the past few years. During that time, he’s released two promising albums as a leader, Modern Times (2015) and The Parade (2016), both featuring his core trio, bassist Yoni Zelnik and drummer Donald Kontomanou, who also play on Avishai’s ECM debut, Joys And Solitudes. The album, which counts seven originals from the bandleader, is spare and contemplative: His best yet—and his most personal.

Joys And Solitudes has more in common with Modern Times than The Parade, a busier affair, with Inor Sotolongo on percussion and César Poirier on clarinet and alto saxophone. On Modern Times, Avishai’s minimalistic, blues-inflected sound is on full display, and he is sensitively complemented by his bandmates, who play simply without being simplistic. The same applies to Avishai’s latest, though his style only has become more appealing in the past four years. Avishai begins several of his compositions unaccompanied, with lush chords and intervallic leaps that recall Thelonious Monk. His solos, spacious and unhurried, are lovely, sounding as if he’s in no rush to prove himself.

The pianist regularly has played as a sideman with bassist Omer Avital and trumpeter Avishai Cohen, and his work with those musicians has been top notch. But this record confirms that Avishai has a promising solo career ahead of him as well.