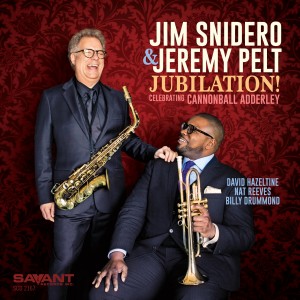 Alto saxophonist Jim Snidero and trumpeter Jeremy Pelt share a deep appreciation for the canon of Cannonball Adderley, the hard-bop/soul-jazz icon who died in 1975 at age 46. Their devotion to that legacy is on full display on Jubilation! Celebrating Cannonball Adderley, where they’re joined by pianist David Hazeltine, bassist Nat Reeves and drummer Billy Drummond in a quintet that recalls the hard-swinging groups the alto-playing Adderley co-led with his cornet-playing brother Nat starting in 1957.

Cannonball Adderley’s music balanced sophistication and serious chops with joyful spirit and soulful earthiness. Snidero, Pelt and company celebrate that vibe and contribute to its continuum on the straightahead jazz timeline with this blissful new release, mixing their interpretations of the classic Adderley repertoire with originals. The album opens with Pelt’s “Party Time,” a feel-good groove that reveals the quintet’s easygoing chemistry and provides the first of many opportunities for the instrumentalists to stretch out with strong individual solo statements.

The group then dives deep into the Adderley catalog, putting their personal spin on “Del Sasser” (from Adderley’s 1960 album Them Dirty Blues), “Wabash” (from 1959’s Cannonball Adderley Quintet In Chicago) and the Frank Perkins/Mitchell Parish ballad “Stars Fell On Alabama” (also from the Chicago album), which features Snidero at his laid-back best. Other highlights include “Sack Of Woe” (from 1960’s Cannonball Adderley Quintet At The Lighthouse), Snidero’s “Ball’s 90th” (marking Cannonball’s milestone anniversary this year) and “Work Song,” a major Nat Adderley-penned hit from the 1960 album of the same name.

Jubilation! Celebrating Cannonball Adderley offers something for hard-bop aficionados and soul-jazz fans alike. It honors an esteemed DownBeat Hall of Famer whose music perpetually satisfies and whose example continues to inspire serious, fun-loving players like Snidero and Pet.