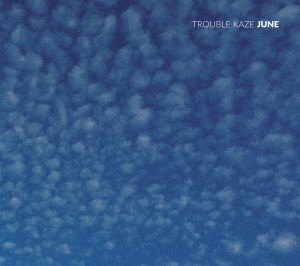 The fact that this album was recorded live in concert performance only underlines the breadth of its daring and imagination. The triple duo/double trio combination of musicians—all led by Japanese pianist-composer Satoko Fujii—makes for a fascinating contrast in density and virtual silence.

The musical sounds created by this Franco-Japanese ensemble are from the outer reaches of what’s possible on standard jazz instruments. It’s only the occasional vocal sound that reminds you that this music is being made by humans at all. By “Part II” the listener is probably as comfortable with the sheer randomness of it all as he or she is going to get, but there are always sudden sounds waiting to entrap the unwary, a constant feeling of aural tension that heightens the experience of listening. “Part III” allows some trumpet sounds, which have been hitherto submerged in the mix to move forward, and with space comes additional extremism. But “Part IV” dies down into virtual silence, as though the musicians are holding their collective breath. “Part V” is similarly silent, until the song develops with seriously intense stabs from all the players—silence shattered by noise. The challenge of this work is its reward, but get used to it before you hear it on headphones.