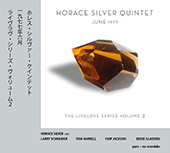 On June 28, 1977, pianist Horace Silver and a quintet consisting of trumpeter Tom Harrell, tenor saxophonist Larry Schneider, bassist Chip Jackson and drummer Eddie Gladden performed in a public marketplace in Bremen, Germany. Producers from Radio Bremen were on hand to record the concert for syndication. But as the radio crew prepared the band for sound check, they made a last-minute decision to put Silver (1928–2014) and his quintet on the air with a simultaneous broadcast—a process that typically requires weeks of planning. Back at the radio station, board operators quickly cut away from their scheduled programming and switched to Silver’s concert. The result—nearly 70 minutes of unadulterated live jazz—was a hit with listeners. In fact, Radio Bremen’s decision to simulcast Silver’s quintet marked the first in a series of live performances that would continue for the next eight years—all of which would later be archived by German record producer Consul Bodo Jacoby, whose new Livelove series from the Promising Music label issued this album. This disc provides a crystalline snapshot of Silver in peak form. The soulful post-bop pianist’s melodic phrases permeate the album, both in his tastefully rendered background comping and in his sparse, vocal-like solo motifs. When Silver tends toward embellishment, as on the jazz waltz “Barbara,” his playing takes on a lively, ringing quality, especially in the upper register, where he spends plenty of time chirping out dissonant harmonies and staccato polyrhythms. Silver’s accompanying musicians match his intensity: Jackson with a sizzling electric bass solo on “Sophisticated Hippie” and Gladden with a cascading solo feature on “Incentive.” Harrell’s electrifying solo on “Out Of The Night Came You” is replete with Woody Shaw-esque pentatonic lines, funky side-slips and lightning-fast chord substitutions. During “In Pursuit Of The 27th Man” (the title track to Silver’s 1972 album), the band locks into a steadfast fusion groove, carried along forcefully by Jackson’s nimble bass line. With such complex rhythms held together at such high speed, the tune is a glowing example of the group’s collective power. The album closes with a 13-minute version of Silver’s bossa nova-tinged classic “Song For My Father.” Enlivened by a spirited, unrestrained solo section, the tune unfolds into a groove-driven free-for-all, with Gladden and Jackson splashing colorfully behind Schneider’s diesel-fueled tenor sax riffs. The album’s final passage is a touching improvised cadenza by Silver, a fitting end to a spontaneous concert caught in the heat of the moment.