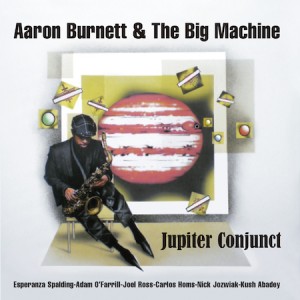 If Aaron Burnett makes music that reflects the times we’re living in, then the saxophonist’s Jupiter Conjunct is an earnest and introspective journey in search of hope, clarity and momentum. His compositions blend avant-garde elements, bebop and electronic textures to artfully create space for The Big Machine, a band he’s played with since 2013.

In “Color Durations,” Carlos Homs’ languorous piano and Adam O’Farrill’s ethereal trumpet evoke restlessness and curiosity, giving way to Joel Ross’ charismatic vibraphone lines and Nick Jozwiak’s sinewy bass on “The Veil.” In tarot, the ace of swords represents truth, vision and breakthroughs, and these are the throughlines that the band strives for as it moves fluidly among jazz, classical, soul and electronic themes. The record moves progressively toward electronic influences on “Ether,” where Burnett and O’Farrill lay down unrelenting melodies and drummer Kush Abadey matches their energy with cinematic sweeps. Electronic freneticism is on full display on “Europa,” which juxtaposes Burnett’s sensible ruminations against Homs’ frenzied sampling. Esperanza Spalding, who contributes vocals on “Ganymede” and an alternate take of the song, adds textural tension with her dynamic scatting.

Burnett has said his compositions reflect “our urgency for freedom and peace in a world ruled by corporations.” This urgency only has intensified for many of us in 2020. With Jupiter Conjunct, the bandleader envisions an expansive and creative world that’s, most importantly, accessible.