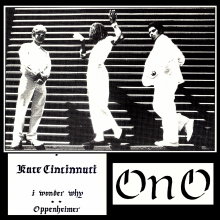 This fall, Ono, a Chicago-based industrial avant-gospel group founded in the ’80s, announced the reissue of its 1982 debut full-length album, Kate Cincinnati, for the first time digitally and on vinyl as a 40-year anniversary reissue. This is a pretty rare get, as Kate Cincinnati was originally self-released in an edition of 300 tapes alongside an accompanying libretto/zine.

Avant-gospel or not, what you have here is sublimely challenging free-jazz. The title track’s saxophone squall sounds like early Art Ensemble of Chicago, which was drawing to the end of its ECM run at the time. The disc then becomes — as befitting something described as a libretto — theatrical.

Whoever “Kate Cincinnati” is, she seriously pissed off “enigmatic frontman Travis,” because he yells at her, “I am shocked and dead!” A studio tape-in declares, “Jesuit blood … .” Horns and vocals collide here, as do edited-in sound effects, as potent melodies float in and out.

It would seem Ono had more ideas than it could handle. By the end of the A-side, they still have percussive bells going and are still howling mad at Kate.

The B-side is, understandably, a more ruminative affair, with “I Wonder Why” dwelling on a guitar drone that almost feels sarcastic. Our narrator yells, “Now I wonder why … these are the best times … I wonder why!” (Wondering that in 1982? Good luck with the next 40 years.)

All of this smashes into a horrifying crescendo until we hit “Oppenheimer,” which goes off like an atomic bomb. Waves upon waves of sax go off as our narrator yells, “Give me Jezebel!”

There may be a stage play going on here, but if so it’s not readily apparent. In any case, it’s an appreciatively offensive assault. The twin electric-guitar and saxophone solos that end it feel like they’re airing out all of humanity’s grievances.