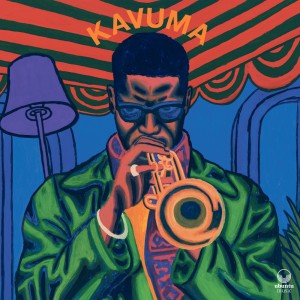 Kavuma is the kick-ass debut album by Uganda-born, British-raised trumpeter Mark Kavuma. If you’re a fan of the hard-bop tradition, and want to hear how this indelible musical movement has been infused with the energy of a new generation of creators from across the pond, you’ve got to check this out.

Let’s start with Kavuma himself. He’s a 23-year-old trumpeter and an up-and-coming voice on the new British jazz scene. That said, he has been on the radar here in the States for some time now. He was named the best soloist at the Essentially Ellington High School Jazz Band Competition and Festival back in 2012, which led to a guest soloist spot with Wynton Marsalis and the Jazz at Lincoln Center Orchestra. Since then, he’s continued to work on his craft. He leads his own quartet. He plays in the house band for the Floor Rippers’ Element Jam, a recurring showcase in London that merges jazz with hip-hop and dance. And he leads Kavuma & The Banger Factory. With his debut, Kavuma surrounds himself with many of the musicians from these worlds. Take, for example, drummer Kyle Poole. The set opens with Poole driving a 70-second drum solo before the rest of the band kicks in. He’s all over this album in a featured role—and, somewhere, Art Blakey is smiling.

But the entire cast here is sensational. Mussinghi Brian Edwards and Ruben Fox kill it on saxophones; Artie Zaitz is a guitarist with a remarkable sound and technique; Reuben James is a sensational pianist; and Conor Chaplin is a bassist full of style and attitude. Kavuma is a terrific trumpeter, and an even better ringleader. He certainly knows how to craft a great program of music. The originals are awesome, and so are the covers. “Carolina Moon,” a tune he heard Thelonious Monk play, is a fantastic throwback, featuring James’ awesome honky-tonk piano. “Barbar G” is an achingly beautiful ballad. And “Church,” which features guest artist Michela Marino Lerman in a tap-dancing role, just tears it up. Throughout the recording, you’ll hear players whooping, howling and cheering on great solos. They’re having a great time, and so will the listener. This is one of the best debuts I’ve heard in a long, long time. It’s full of joy, soul and swagger.