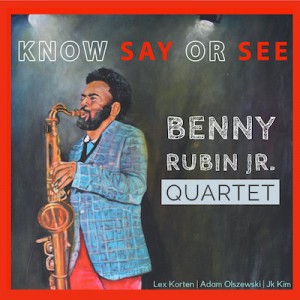 Benny Rubin Jr.’s robust voice on tenor saxophone establishes itself from the very first notes of the plaintive wail that opens “Know,” the leadoff track from the Detroit-bred, New York-based bandleader’s second album.

With Know Say Or See, Rubin follows up his well-received 2017 debut, What’s Next, with a quartet recording featuring himself on tenor and alto saxophones, pianist Lex Korten, bassist Adam Olszewski and drummer JK Kim in a fairly diverse program of six Rubin originals and two standards. The group sounds strong and confident in a bunch of different jazz settings, from slow blues (“Know”) and hard-bop (Horace Silver’s “Kiss Me Right”) to avant-garde (“Say”) and epic/spiritual (“Down They Go,” “Or See”).

There’s conviction to spare in Rubin’s playing. His sound is raw and unpolished, with a low-end resonance that feels as if it emanates straight from the gut. Rubin is just getting started with what looks to be a promising career, and he’s clearly come a long way since his studies at the Detroit School of the Arts, his performance with the Detroit Jazz Festival Youth All-Stars in 2016 and his appearance on the 2018 Geri Allen tribute CD Lifetime with other young Detroit-area players. On Know Say Or See, he delivers fully developed ideas with the intensity and sensitivity of a maturing man on a mission.