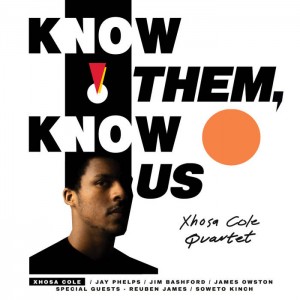 You’ve got to love it when a saxophonist’s record starts with a freaking awesome drum solo. But that’s exactly how Xhosa Cole kicks off K(no)w Them, K(no)w Us, his debut on Stoney Lane Records. The 24-year-old tenor saxophonist/composer is a British sensation and proves that he’s here for blood with this release.

The drum solo kicks off “Zoltan,” an awesome Larry Young tune first introduced on Unity, a 1965 Blue Note release. From the intro to the amazing drumline march beat, delivered with verve by Jim Bashford, Cole and company match the “tenor” and intensity of the original, then kick it into a modern blast. These guys make this music new again.

For those not yet hip to Cole, he’s got credentials, winning the BBC 2018 Young Musician award as well as Jazz FM’s Breakthrough Artist of the Year award for 2020. He can play. I love his fire on this record, blissfully taking on seven jazz classics … and blowing them up. It’s not that he changes them. It’s that he gives them the fire that only a young, hungry artist can deliver.

Beyond “Zoltan,” Cole and his quartet take on such classics as Ornette Coleman’s “Blues Connotation.” Jay Phelps blasts his intentions on trumpet as Cole dances and wails underneath before Phelps and the rhythm section of Bashford and James Owtson drive this tune crazy.

Cole doesn’t lay out on these tunes, but he does let others do their thing, then he does his own with rips, raves, twirls and all-out jams. He’s got technique, talent, artistry and a burning desire that shows throughout the set.

That said, jazz artists make a name on uptempo tunes but often enter the hearts of jazz fans on ballads. Cole’s got it covered. His version of the Rogers & Heart classic “I’ll Take Manhattan,” named simply “Manhattan” on this recording, slays the heart. It exudes all the love of an Ella Fitzgerald turn, but all dressed up for 2021.

For the rest of the set, Cole rips up Thelonious Monk’s “Played Twice,” John Coltrane’s “On A Misty Night,” which is sweet, and Bobby Haggart’s “What’s New,” which is downright sultry.

The set ends with Lee Morgan’s “Untitled Boogaloo,” which alone is worth the price of admission. It’s a true James Brown-meets-bebop moment with a guest drop-in from Soweto Kinch.

At 24, Cole has plenty of room to grow and, as demonstrated on K(no)w Them, K(no)w Us, a firm foundation to launch from.