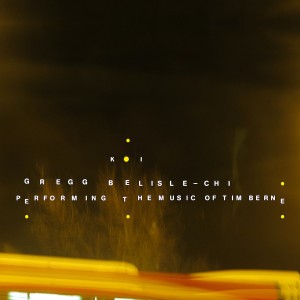 While Tim Berne has been making records for 42 years, only recently have other musicians taken on his work. In 2017, his long-time pianist Matt Mitchell offered Førage, a solo recitation of medleys that mixed and matched themes from throughout Berne’s career. Now comes Koi, by guitarist Greg Belisle-Chi. It is sanctioned by the composer, and producer/guitarist David Torn, who has worked repeatedly with Berne in several capacities, mixed and mastered it.

Despite these associations, it presents a thoroughly independent take on Berne’s music on several levels. The instrumentation alone constitutes a radical step away from the composer’s sound world, since the steel-stringed acoustic guitar barely figures in his discography. Second, while Berne and his musicians often blow forcefully and at length, Belisle-Chi’s renditions emphasize elegant melodies and contrapuntal elements. By toning down the attack, other feelings come into play. “Middle Seat Blues” begins with wry humor and ends with a dissonance. And Belisle-Chi negotiates the intricate switchbacks of “Huh/Brokelyn” with an unruffled reflectiveness. It’s easy savor the guitarist’s transparent presentation without knowing anything about Berne’s music.