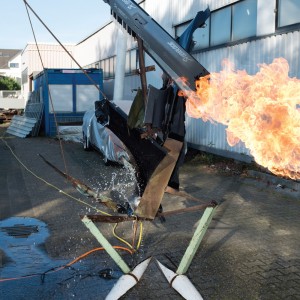 Infusing instrumental, minimal and electronic music with meaning can be a fraught endeavor. A listener brings a litany of experiences to bear on any given work, and even if a performer stipulates a framework, it’s relatively easy to discard it, instead choosing to emotionally paint on what’s perceived as a blank slate.

With composer Tim Hecker’s work, which stretches back to the early 2000s and counts collaborations with folks like experimentalist Daniel Lopatin (Oneohtrix Point Never), there’s sometimes an eerie, icy feeling coursing through the recordings. His 2013 album, Virgins (Kranky), took on a political tinge, with Abu Ghraib being referenced on its cover and in a song title, and his 2016 release, Love Streams (4AD), included contributions by Kara-Lis Coverdale and the Icelandic Choir Ensemble, a shadowy current emerging, further darkened by ominous vocals.

Coverdale returns for Konoyo, which translates from Japanese to “the world over here,” and is joined by Tokyo Gakuso, a gagaku ensemble trucking in centuries-old court music. The wind instruments, Coverdale’s keyboards and Hecker’s guitar, keys and digital contributions merged in a temple near Tokyo for the recording, turning up jittery results, as on “Keyed Out.” No matter how processed or chiaroscuro the sounds here, Hecker’s collaborators help imbue the album with plaintive humanity; “In Mother Earth Phase” vibrates with what might be akin to profound realizations striking some deep thinker, or the sun briefly piercing the sky on an otherwise overcast day.