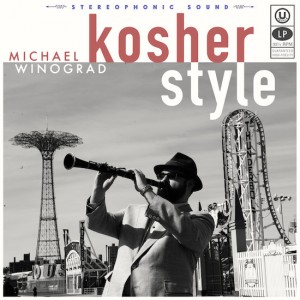 There was a time, back in the 1960s, when klezmer was considered not just retro but actually dead, and those who played it were not practitioners but revivalists. Clarinetist Michael Winograd grew up in that era, but plays like a skeptic—listening to him, you’d never imagine there was a time during which klezmer was in decline.

Much of that has to do with the way Winograd has mastered the klezmer clarinet vocabulary. It’s not the tunes he plays so much as the way he plays them that stamps this music as being “Kosher style”—the throaty glissandos, the crisp grace notes, ululating ornaments that make his clarinet phrases sound distinctively, definitively of the Jewish tradition. Interestingly, the rest of his young, Brooklyn-based ensemble pretty much leaves that space entirely to Winograd. Although there are moments in which the saxophonists mimic the clarinet’s phrasing, trumpeter Ben Holmes and trombonist Daniel Blacksberg tend to play it straight, to such an extent that Holmes’ carefully-tongued phrases would be as at home in a polka band as in Winograd’s ensemble.

Nevertheless, it’s hard not to be awed by Winograd’s complete command of klezmer ornamentation, much less the wit with which he deploys it to make the music fit contemporary Brooklyn Jewish culture. It’s so kosher you should feel guilty listening to the recording on your stereo Friday night.