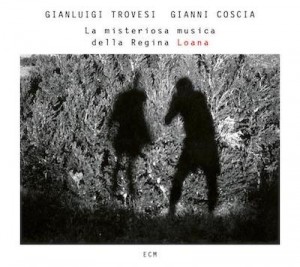 Umberto Eco once said of Gianluigi Trovesi and Gianni Coscia, “On a street corner or in a concert hall, they would feel at home just the same.” For their fourth ECM installment, the clarinetist and accordionist prove that statement in a tribute to their departed friend, taking listeners on a sonic journey through Eco’s semi-autobiographical novel La Misteriosa Musica Della Regina Loana. Most of the songs are mentioned in the novel itself, the centerpiece being the five-part “EIAR”; titled in homage to Italy’s first radio station, the suite drips with nostalgia. Despite being of literary genesis, the album carries a tender cinematic charge, evident already in Coscia’s opening accordion solo on “Interludio.” More overt connections to the silver screen abound on “As Time Goes By,” from Casablanca, which spreads across the ear like butter over warm bread, and the mysterious yet emotionally transparent “Bel Ami,” from the 1939 film of the same name. But their masterstroke comes on “Gragnola.” Moving from tragedy to triumph, it’s a film in and of itself, casting in its leading role the unabashed love that defines a grander story.