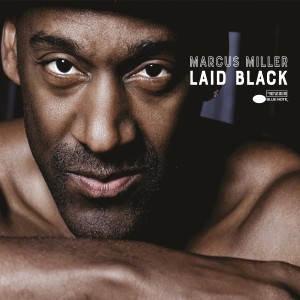 There’s no judging an album by its cover. But the cover of Marcus Miller’s Laid Black is a litmus test: The title’s pun, the image of a shirtless Miller gazing with soulful directness and the musician’s reputation itself will divide most listeners into believers and doubters before they’ve even heard the first bass slap.

Lovers will find plenty to love in this groove through urban styles—hip-hop, trap, soul, funk, r&b and jazz—with guest artists like Trombone Shorty, Take 6, Jonathan Butler and Selah Sue rounding out Miller’s fine working band. In the foreground is virtuosic slapping and popping from Miller’s cherished ’77 Fender, with vigorous lows, a sharp middle and metallic high end. Haters will find plenty to hate in that bass exhibitionism and the album’s synth-pop stylings, in Miller’s steadfast dedication to his formative Tutu-era aesthetic. I land in the middle.

On “7-T’s,” Miller’s expert slickness packages even the authentic street funk of Trombone Shorty in an ’80s softcore soundtrack, the stuff of chocolate-covered strawberries and hot tubs. A guitar solo that dates to Miller’s popular emergence can dislocate a more compelling track, like the Sly Stone-inspired, downtempo funk cover of “Que Sera Sera.” And not to build sandcastles of taste here, but when the hip-hop-influenced “Keep ’Em Runnin’” opens with a synthy Weather Report salvo, I can’t help thinking of Flying Lotus, who covers some similar territory with more contemporary relevance.

Anachronism aside, that solo, like so much else on the album, tells us exactly how to hear it, dictating the listening experience. “Uh-huh!” Miller will shout during his own solos, announcing a shift from funky to fonky. There’s not much room for self-guided discovery in this music: Appreciation already is included in the purchase price.

Unlike 2015’s Afrodeezia (Blue Note), where Miller’s glibness was balanced by the gravity of a slave-history theme, Laid Black is more blatantly commercial, a smooth, all-inclusive cruise of an album. That these tracks are finely produced and superbly performed has little relevance to whether you’ll like them. To misquote Tom Wolfe, you’re either on the boat or off the boat—your personal taste long ago decided your eagerness to make this trip.