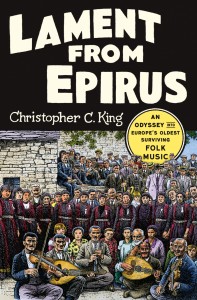 Christopher C. King has figured out how to make some of his fixations work in his favor.

From collecting scores of forgotten 78 RPM records to sussing out the almost-lost histories of insular music enclaves, the Grammy-winning producer has dug not for the most obscure, but most meaningful music and stories sitting around with a veneer of dust settled atop it all.

Lament From Epirus, his first book, details King’s trips to a secluded northwestern region of Greece where he gets drunk on tsipouro, dances poorly and attempts to understand why folk music from that part of the world connects to his obsession with Southern roots music. It’s equal parts travelogue, ethnomusicology, history lesson and wry self-deprecation.

On his trips (documented not just in this new book but in a story by author and critic Amanda Petrusich), as in daily life, King’s work serves to lionize the utilitarian nature of music that seems perilously close to obsolesce and disappearance. He rails against the globalization of art, while omitting any discussion of our changing needs in an ever-new and confounding world. But it’s seriously tough to doubt his adoration of Epirotic music and players like violinist Alexis Zoumbas and clarinetist Grigoris Kapsalis with their laments and party tunes, all framed by King’s travels.

At the very worst, Lament From Epirus features a writer at odds with contemporary society who has no time for sub-genres of sub-genres or even the plaintive simplicity of a good garage-rock stomper. At his best, though, King’s a vivid writer and a champion of music that we’re all better for hearing.