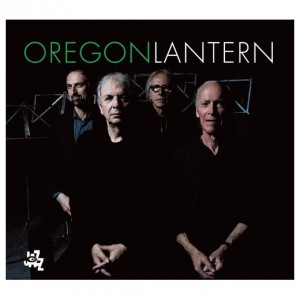 When Oregon appeared on the cover of the Oct. 10, 1974, issue of DownBeat, the magazine’s table of contents contained a blurb for readers who were not familiar with the band: “Four former members of the Paul Winter Consort … comprise this unusual acoustic chamber ensemble. Their music is full of peace, beauty and freedom of expression … .” That description of Oregon’s music is still apt today. Nearly 50 years after it was founded, the quartet still has two of its original members: woodwinds player Paul McCandless and guitarist and keyboardist Ralph Towner. Rounding out the group are longtime drummer/percussionist Mark Walker and double bassist Paolino Dalla Porta, who joined in 2015 but is making his recording debut with Oregon on its terrific new album, Lantern. All 10 tracks here are original compositions—except for a beautiful rendition of the traditional tune “The Water Is Wide,” arranged by McCandless, who plays an impressive array of instruments on this disc: oboe, English horn, soprano saxophone and bass clarinet. Towner displays his exceptional skills on classical guitar, piano and synthesizer. While some tracks have a bit of a world-music feel, others, like “Walkin’ The Walk,” are clearly in the jazz vein. Throughout the program, all four musicians’ exquisite solos are featured amid polished, profound cohesion. Graceful teamwork is what makes Lantern shine so brightly. Oregon is currently on tour, with dates in numerous European cities, including Augsburg, Germany (July 12), Warsaw (July 15), Rome (July 17) and London (July 20–21).