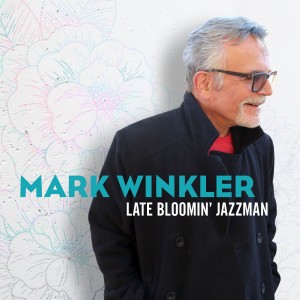 Mark Winkler is an unsung hero of West Coast jazz. The singer and lyricist has been quietly churning out idiosyncratic hipster songs with a slightly retro feel for years. His 20th album, Late Bloomin’ Jazzman, may just be his best.

It may also be his most personal. His crafty lyrics reflect on age (the title cut, “Old Enough”), human frailty (“Marlena’s Memories”), love and loss (“In Another Way,” “Before You Leave”), and the power of art to transcend time (“Bossa Nova Days” and “If Gershwin Had Lived”).

When he’s not singing his own compositions, co-written with a stable of talented composers, he chooses excellent covers by composers from the Gershwins to Michael Franks, to Burton Lane and Yip Harburg, to Shelly Berg and Lorraine Feather. He also has the smarts to surround himself with such first-class L.A. musicians as John Clayton, David Benoit, Bob Sheppard and Jamieson Trotter. As a result, lovely arrangements and tasty soloing abound.

As a singer, Winkler is a storyteller, an avuncular presence who imparts a hard-earned wisdom: “I’m old enough/ Not to be fooled by the lights and the show/ But I’m young enough/ To know I don’t know all that much, don’t you know.”

Throughout this fine set, his voice is wry, unpretentious and warm. In short, he is a mensch — and splendid company.