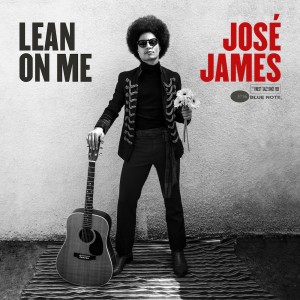 Ever since José James emerged on the scene, he’s struck a shaky alliance with jazz. For every tribute he’ll do, for, say, Billie Holiday or John Coltrane, he’d go to great lengths to declare that he doesn’t want to be viewed as a jazz singer. For sure, he’d established ties to DJ culture, starting with his sterling debut, The Dreamer, and teaming with British impresario Gilles Peterson.

His “neither fish nor fowl” stance hasn’t always played to his advantage. On some of his later albums, many of his genre-defying originals lacked the melodic stickiness associated with pop, r&b, hip-hop or jazz. Mainly, it was because of tentative songwriting. Sometimes, though, the best way to become a better songwriter is concentrating on someone else’s indelible songbook.

That’s what he’s done with Lean On Me, a superb exploration of Bill Withers’ discography. With the help from a few jazz contemporaries, James doesn’t stray far from Withers’ rugged soul arrangements. In fact, the disc is as much a case study of Withers’ artistry as it is a tribute. But what Lean On Me lacks in interpretative ingenuity, James compensates for with conviction. He sounds truly engaged with the material throughout, as his whiskey-sour baritone conveys the rainbow of emotions that distinguishes Withers’ music. James deftly articulates simmering vim on “Who Is He,” bottomless remorse on “Hope She’ll Be Happier” and carefree optimism on “Lovely Day” with poised aplomb, making Lean On Me his most assured effort since The Dreamer.

Lean On Me: Ain’t No Sunshine; Grandma’s Hands; Lovely Day; Lean On Me; Kissing My Love; Use Me; Who Is He; Hello Like Before; Just The Two Of Us; Hope She’ll Be Happier; The Same Love That Made Me Laugh, Better Off Dead. (54:27)
Personnel: José James, vocals; Pino Palladino, bass; Kris Bowers, keyboards; Nate Smith, drums; Brad Allen Williams, guitar; Lalah Hathaway, vocals (3); Dave McMurray, flute (5); Marcus Strickland, tenor saxophone (9); Takuya Kuroda, trumpet (6).