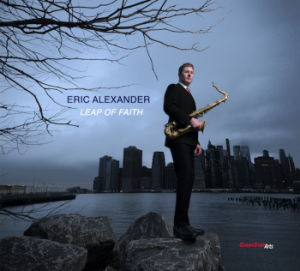 Eric Alexander steps outside of himself and embarks on far-reaching excursions for this live outing, recorded last August at New York’s Jazz Gallery with bassist Doug Weiss and drummer Jonathan Blake.

Leap Of Faith presents the tenor saxophonist in a liberated light, with few harmonic constraints to heed and no commercial expectations whatsoever from Jimmy Katz’s nonprofit organization Giant Step Arts [ed. note: Katz is a regular DownBeat contributor]. Alexander takes full advantage of this artistic and financial opportunity to explore his own wide-ranging tastes and shed his image as a bebop purist by boldly venturing into avant-garde territory and beyond. His playing is explosive, unbridled, searching and cathartic in this chordless trio setting—wide-open terrain that previously was unexplored by Alexander.

The program is all Alexander originals that were composed during a recent period of turbulence in the saxophonist’s life, and he clearly uses this new material to vent his wildest ideas and innermost emotions. Leap Of Faith begins with a brief free investigation that quickly takes shape as “Luquitas,” a showcase for the group’s boundless energy and unceasing momentum. The saxophonist plays with uttermost intensity on the swaggering “Hard Blues” and the Coltrane-fired “Second Impression.” Blake’s thundering drums anchor the blistering “Frenzy,” and Weiss’ resonant bowings serve as an essential undercurrent for “Magyar,” a work based on a reduction of themes from Béla Bartók’s Music For Strings, Percussion And Celesta.

With Leap Of Faith, Alexander followed the advice of his longtime friend Katz and pursued a project that radically departs from the norm, investigating a more expansive setting than the traditional bebop métier that has defined his artistry for decades. The resulting album is an honest depiction of one of today’s most burning tenor players, unleashed, at a pinnacle of raw passion.