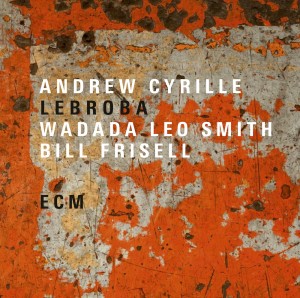 Free-jazz drumming icon Andrew Cyrille shows no sign of slowing down. At 79, he remains as wide open to the melodic possibilities of his instrument as he was on 1969’s What About? and 1974’s Dialogue Of The Drums with Milford Graves. On his second ECM release, Cyrille again is paired with the endlessly inventive guitarist and fellow melodicist Bill Frisell. Trumpeter Wadada Leo Smith rounds out this remarkably creative and empathetic triumvirate.

Cyrille’s closer, “Pretty Beauty,” a tune as tender and affecting as Miles Davis’ “Flamenco Sketches” or Erik Satie’s “Gymnopedie No. 1,” is underscored by the drummer’s alluring brushwork and Frisell’s patient chording, which highlights Smith’s beautiful lyricism on muted trumpet.

Rather than fronting the proceedings by flaunting his chops, Cyrille underscores Lebroba with a combination of grace, zen-like restraint and authority.