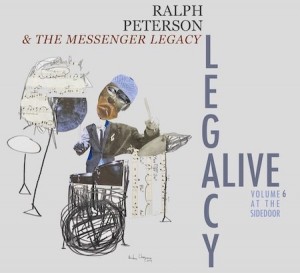 Opening the second disc of Ralph Peterson & The Messenger Legacy’s tribute to Art Blakey is the sound of measured beating on a tom as time ticks away on the hi-hat.

For Peterson’s tribute, the drummer gathered fellow alumni of Blakey’s band, brought them to a small club in Connecticut and set to work. The result is a collection packed with the kind of explosiveness that can be elusive in a studio session, but occurs organically in intimate live settings. Across 11 mostly uptempo compositions made famous by Blakey, the playing is immediate and affecting, coursing with a vitality that has to do with the club’s friendly confines and the band’s affection for the material.

While drum solos might set the tone for a few of the pieces—on “Caravan,” Peterson establishes a back-of-the-beat pace that transitions to frenetic swing—the tunes are in the end all about collaboration. On alto saxophone, Bobby Watson lends an authoritative swagger to the music, while pianist Geoffrey Keezer thrills during a percussive solo turn on “A La Mode.” The majority of the tunes on Legacy Alive fail to slow below a simmer, and on “My One And Only Love,” tenorist Bill Pierce begins with rapid-fire arpeggios, exploring the space, pushing through chromaticisms to the theme, played with a syrupy thickness as the rhythm section enters.

This double-disc set proves that the passage of time has done nothing to mute the passion with which Peterson, or the rest of the Messengers alumni, approach the music made under Blakey’s encouraging downbeat.