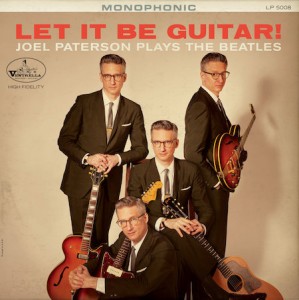 John Lennon and Paul McCartney created such a rich body of work that nearly every new tribute to The Beatles generates a healthy dose of musical joy—regardless of the genre. Even though tributes to the lads from Liverpool are diverse and commonplace, Chicago-based guitarist Joel Paterson still generates excitement with Let It Be Guitar! Joel Paterson Plays The Beatles, a disc that would reside nicely in a playlist alongside Chet Atkins’ 1966 LP Picks On The Beatles.

Mixing elements of jazz, rock, country and exotica, Paterson (electric guitar, lap steel, pedal steel), Beau Sample (bass) and Alex Hall (drums) explore The Beatles’ early work—such as “All My Loving,” “Can’t Buy Me Love” and “This Boy”—as well as later material in the band’s career (like George Harrison’s “Something” and even the brief “Her Majesty,” the “hidden track” from Abbey Road). Jazz organist Chris Foreman sits in for few tunes, adding intoxicating textures to the mix.

Paterson clearly has an affinity for The Beatles’ early work, as evidenced by the artwork for the album, a parody of the cover of the band’s first Stateside LP, Introducing … The Beatles. Overall, Paterson embraces a spare, less-is-more aesthetic.

It’s hard not to smile or sway while listening to the twangy rendition of “And I Love Her” or the sly version of “Things We Said Today.” The readings of “If I Fell” and “Michelle” are so charming that they might tempt the listener to listen to each track again, rather than running to hear the Fab Four versions. “Honey Pie” allows Paterson to show off his skills on acoustic, electric and pedal steel guitar.

“I Don’t Want To Spoil The Party” isn’t on most fans’ list of Top 10 Beatles tunes, but hardcore fanatics might recall that Rosanne Cash took a version to the top of the country charts in 1989. Here Paterson concludes his rendition with a powerful, ghostly pedal-steel wail.