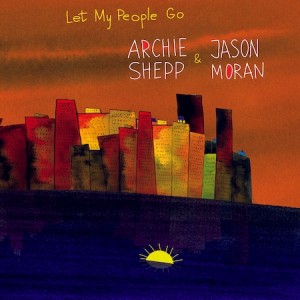 In June 1965, Archie Shepp and John Coltrane recorded Ascension. July was when the pair performed what would become New Thing At Newport. Then on to Chicago, where a festival crowd squirmed in disbelief as Shepp and Trane gleefully burned jazz’s mainstream bridges to a cinder. DownBeat called it “a bomb.” Coltrane was chasing inner tranquility. But Shepp was stoking the politics of liberation, where he was among the angriest young avatars of an avenging avant-garde.

Now, we have Let My People Go. It gives listeners a far warmer and more intimate portrait of Shepp, who at 83 remains formidable, but not forbidding. During his spacious career, he has favored duets and here finds fitting company in pianist Jason Moran. He has also settled into a comfort zone of familiarity that he enjoys working. Shepp’s recorded more than a half dozen versions each of “Lush Life” and “’Round Midnight” since the late ’70s. But they provide an outlet here for the romantic tenor in Shepp. He whispers in a horse breathiness that evokes shades of Ben Webster. Shepp orbits the tunes closely with variations decorated in arpeggiated little tentacles that flutter like fringe.

Anguish becomes strangled gravitas on the spirituals, where Moran moves from accompanist to power puncher. He lays an undercurrent of rolling thunder on “Go Down Moses” and makes a concerto of “He Cares.” For all the heft, however, they move like slow, stately dirges.

Recorded live, it all sounds like a studio job. Maybe no one dared make a sound. You don’t argue with an original like Shepp.