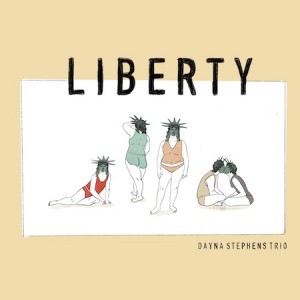 Dayna Stephens dubbed his latest album Liberty for several reasons. He wanted to play around with implied harmonies, so he composed for a trio, sans piano or guitar. He also wanted to make a broad statement about the interrelatedness of humanity, his compositions alluding to freedom as the most basic of human rights. And he wanted to celebrate his personal delivery from the burdens of thrice-weekly dialysis, the treatment for the rare form of kidney disease that had overshadowed his life for several years.

This album, his ninth as a leader, flows thematically from Gratitude, his 2017 “thank you” to those who had helped him weather his illness. On these releases, the charismatic melodicism of Stephens’ solos commands most of the focus, all the more captivating for the high-wattage players alongside him. (Pianist Brad Mehldau and guitarist Julian Lage contributed to Gratitude.)

But on Liberty, Stephens introduces rhythmic variations that serve to enhance his melodic assertions. With bassist Ben Street and Gratitude drummer Eric Harland riding shotgun, listeners would be hard-pressed to notice the unvoiced chords. Many of them are well-known, anyway: Stephens based his compositions “Kwooked Stweet” and “Faith Leap” on John Coltrane’s “Straight Street” and “Giant Steps,” respectively, and “Loosy Goosy” is a spirited gambol through “Rhythm” changes.

On other tunes, like “Rhyming History” and “The Lost And Found,” though, Stephens sinks into a closed-eye pulse with his sidemen, harmonic considerations (implied or otherwise) set aside momentarily as he stretches into the feel of his instrument. Listeners are left to follow where such freedom leads.