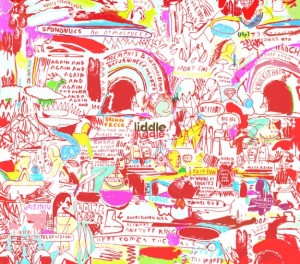 Olli Hirvonen’s guitar provided a dash of bombast on Brian Krock’s 2018 album, Big Heart Machine. The big band made something of an anachronistic album, pushing the vanguard of large-ensemble music, all scuffed up by those metally theatrics.

For liddle—an ensemble counting many of the same players, but one that formed prior to the band that played on Heart Machine—Hirvonen again adds outsized blasts of electric guitar, lending no-wave flair to a tune called “Knuckle Hair.” It’s not all that wild throughout the program, though Krock’s fervent experimentalism is readily apparent, and pleasantly so during his reeling saxophone feature on Anthony Braxton’s “Opus 23b.”

The athleticism of the avant-garde is, in part, what the originals on liddle are about, too.

“I kept writing more and more ridiculously complicated and abstract conceptual music and they would always nail it,” the bandleader said about working through his compositional process with the ensemble. “So, at a certain point my attitude changed to wanting to stump these guys, because we had the luxury of time to get deep into the nitty gritty of it all.”

The tune “Heart Machine,” where Krock’s other troupe actually draws its name, is a slow advance toward a warbling summit, Hirvonen’s guitar nimbus serving as the composition’s backdrop. Even in spots where the six strings get to be a bit overwhelming—“Memphis” hedges toward a rock-opera feel—pianist Matt Mitchell, bassist Marty Kenney and drummer Nathan Ellman-Bell ground the proceedings with playful, bounding musical gestures, enabling some of liddle’s most outside moments.