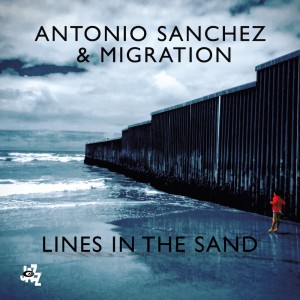 With Lines In The Sand, Antonio Sanchez sounds a call not only to action, but also about action. Fortified by the talents of his Migration band, the drummer/composer analyzes revolution as the heartbeat of jazz, deploying sonic avatars across a montage of police brutality and protest. Over a delicate bed of John Escreet’s Fender Rhodes, the three-part suite Travesía unravels its politics into a patient groove. Like a thickly canopied forest, it affords only occasional shafts of light to mark the way. As drums announce themselves as being fully present, tenor saxophonist Chase Baird and vocalist Thana Alexa cut through the foliage, fulfilling a promise of a clearing.

At the other end of the album is the two-part title track: an epic testament to memory, given photorealistic depth by Alexa’s wordless brushstrokes. Cell by cell, it builds from the ground up, anchored by bassist Matt Brewer. Before that, the band travels a “Long Road,” along which Sanchez’s tenure with Pat Metheny comes to bear. While it shares the album’s feeling of travel, here a darker shadow blankets the way ahead. Rather than idealize the landscape, Sanchez finds corruption in it and turns it like a stone in a river, until it’s smoothed into something beautiful and humane. In the tracks that follow, he finds greater urgency, drumming with narrative purpose. The song “Home,” set to lyrics by Alexa, plants hope amid the tectonic harmonies. She crafts a sense of belonging in solitude, and seems to understand that the body is both a beginning and an ending. If only it can survive the night, she seems to say, it can greet the day, renewed.