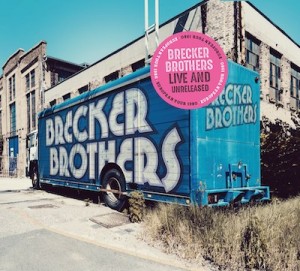 The funk runs thick on this two-CD recording from a July 1980 performance in Hamburg, Germany, marking an especially exciting addition to The Brecker Brothers’ discography.

Live And Unreleased documents the most potent band coming out of the 1970s New York jazz-funk scene in a slamming performance that presents all six members—brothers Randy and Mike (1949–2007) Brecker on trumpet and tenor saxophone, guitarist Barry Finnerty, keyboardist Mark Gray, electric bassist Neil Jason and drummer Richie Morales—at the peak of their creative powers. In true Brecker Brothers fashion, this iteration of the iconic fusion ensemble plays with extreme energy, exacting precision and audacious derring-do as the musicians rip through tight, angular arrangements of familiar fare like “Strap Hangin’,” “Sponge,” “Inside Out” and “Some Skunk Funk.” Every single note—and there are lots of them to enjoy here—is imbued with purpose and sizzle.

The softer, soulful side of electric jazz comes through as well, most prominently on the Mike Brecker-penned “Tee’d Off” and in mood-setting sections of “Funky Sea, Funky Dew” and “I Don’t Know Either.” And when it comes time for the cats to solo, watch out: Each of these fearless improvisors will set ears ablaze and brains awhirl. It’s an adrenaline-fueled, electric adventure that will transport you back to a time of large, enthusiastic crowds in throbbing, sweaty venues, where the musicians on stage fed ravenously on good vibes emanating from a sea of humanity. Turn up the volume, close your eyes and prepare for a long, thrilling night with one of the most ass-kicking bands to ever play in concert. And pay close attention to the bold choices made by Mike Brecker during his nine-minute unaccompanied solo on “Funky Sea, Funky Dew.”