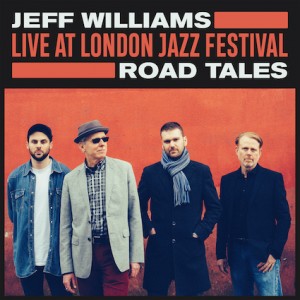 Live At London Jazz Festival: Road Tales highlights how drummer Jeff Williams’ sharp compositions and his tricky and assertive swing feel should be just as appreciated today as his work with Stan Getz and Dave Liebman was in the ’70s.

Tenorist Josh Arcoleo and altoist John O’Gallagher carry “New And Old” through a series of twists before the quartet turns its energy around during the coda. Williams also includes a few reinventions of recent works, such as “Scrunge,” a highlight of his 2019 disc, Bloom. What previously was a piano-trio vehicle gets a jolt of new energy; the horns add heft, but retain the piece’s disjointed flow and momentum. Williams focuses his own solos on guiding the band, the exchanges sometimes resulting in the kind of charge that must have won over the festival audience: Williams’ rumble pushes Arcoleo across a wide range on “Search Me.” Other times, the effect is subtly delivered. As he leads with the cymbals before shifting emphasis among the toms on “Under The Radar,” Williams’ approach mirrors the front line’s phrases. But he also says a lot quickly on “Double Life,” when the bandleader leaves himself to his own devices.