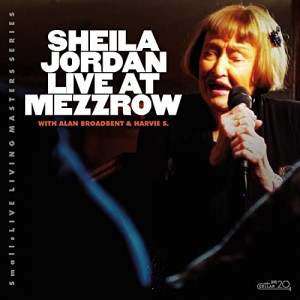 Sheila Jordan made her first album in 1962 at age 34, a late start in the youth-driven music game. She’s just made her latest at 93, a late hour few singers enjoy and proof that the surest way to manage one’s legacy is to outlive all the competition.

As if to bracket all the time in between with a then-and-now match-up, we are reminded how nicely the years have pampered her in reprises of “Falling In Love With Love” and “Baltimore Oriole,” both of which were on her first Blue Note LP back in the day. On “Love” she made something of an even-quarter-note groove of the tune in 1962. Here she still begins with a bass intro, but moves through the song in a much freer and casual way, even scatting one chorus. “Oriole” is a song that gives a singer lots of room to play. Jordon is wily without being coy or coquettish. Her sound, phrasing and musicianship are mostly what they have always been, which is not to say perfect. He vibrato has broadened a bit, giving some of her ballads a Billie Holiday-like quality.

Jordan is a singer who favors some of the less traveled corners of the American Songbook. But her sets are often flecked with specific references to Charlie Parker, in whose bubble she was shaped. This draws her into that most affected dissection of jazz singing called vocalese, in which often amateurish hagiographies to jazz musicians are forced upon their improvised solos. It’s a non-consensual marriage between words and music whose inherent awkwardness imposes itself on the singer.

Live At Mezzrow: Bird Alone; The Touch Of Your Lips; What Is This Things Called Love; The Bird & Confirmation; Look For The Silver Lining; Falling In Love; Baltimore Oriole; I Concentrate On You; Blue And Green; Autumn In New York; Lucky To Be Me. (71:41)
Personnel: Sheila Jordan (1, 2, 4–7, 9, 10) vocals; Alan Broadbent, piano; Harvie Swartz, bass.
Ordering Info: smallslive.com