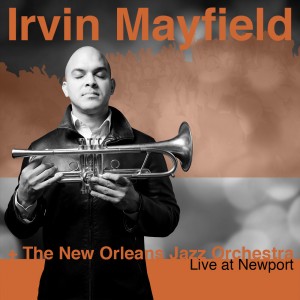 Irvin Mayfield leads his veteran jazz orchestra through a high-energy musical charge on his latest disc, a live set from the Newport Jazz Festival recorded in August 2015.

Raw, honest and emotional, it’s the second live album from Mayfield and his orchestra in two years, following the release of New Orleans Jazz Playhouse in 2015. That album, which featured several small ensembles, painted the trumpeter in mellow, intimate tones. In contrast, Live At Newport is all about outsized presence and sound.

Festive as this album is—“We’re making history!” Mayfield exclaims at the beginning of the set—it’s not without moments of great import and seriousness. “Angola,” with its chest-thumping minor shuffle, is a song about prison reform, and “May His Soul Rest In Peace” was written by Mayfield in tribute to his father, who was a victim of Hurricane Katrina. It is a solemn, personal testament to the strength of New Orleans’ black community in the wake of great tragedy.