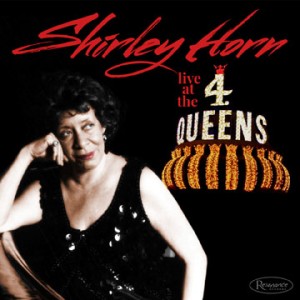 The new album by Shirley Horn (1934–2005) represents a glorious “Fourth Act” for the acclaimed vocalist/pianist. Act I began with her 1960 debut, Embers And Ashes, and her attempt to establish a foothold in the jazz world. Act II consisted of the years Horn devoted to family life and to performing mainly around Washington, D.C. Act III, which featured many commercial and critical peaks, started with the release of 1987’s I Thought About You: Live At Vine St. and included her Grammy win for the 1998 disc I Remember Miles, a tribute to one of her most ardent fans, Miles Davis. Now we begin Act IV, a phase of rediscovery anchored by Live At The 4 Queens. This 52-minute trio disc, recorded at the famed Las Vegas hotel on May 2, 1988, features the simpatico accompaniment of bassist Charles Ables and drummer Steve Williams, who both played on I Thought About You. Although the programs on the two live albums feature Great American Songbook tunes and Jobim compositions, there’s only one song that appears on both discs: the Rodgers & Hart classic “Isn’t It Romantic?” The 10-minute instrumental rendition on 4 Queens is a terrific vehicle for Horn’s authoritative, swinging pianism. Elsewhere, her distinctively breathy yet always enthralling vocals take center stage on “You’d Be So Nice To Come Home To” and “Lover Man.” The latter tune—which finds Horn injecting dramatic pauses into her piano lines and her vocal delivery—illustates how Horn’s unique appeal lay in the way her playing and singing complemented each other so elegantly. This program of previously unreleased material concludes with a head-bobbing, instrumental romp through Oscar Peterson’s “Blues For Big Scotia.“ The accompanying 56-page booklet and a 33-minute documentary film that Resonance produced (and posted here) provide fascinating insights into the life and career of this remarkable artist.