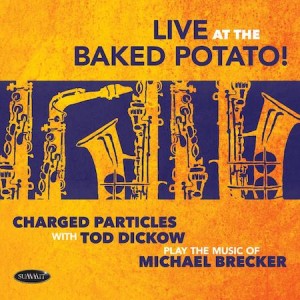 A good live album brings edge and excitement to even the slow songs. Live At The Baked Potato! Charged Particles With Tod Dickow Play The Music Of Michael Brecker contains only one slow song, simplifying the task.

So, do the fusion-leaning Bay Area trio and tenor saxophonist Dickow succeed at bringing edge and excitement to Brecker’s oeuvre? The answer: intermittently.

As the album’s featured soloist, Dickow bears a clear Brecker influence but is no slavish imitator — on the saxophone, at least. When he’s on, he produces exciting, satisfying stuff. On “African Skies” he adds muscle and character to the 12/8 groove, and projects supreme confidence all over “Not Ethiopia.”

The album highlight is “The Mean Time,” a peak both for himself and keyboardist Murray Low, the secondary soloist, who builds mystery and surprise while Dickow goes for aggressive energy and labyrinthine melody. At other times, though, Dickow spins his wheels, relying on stock patterns and devices.