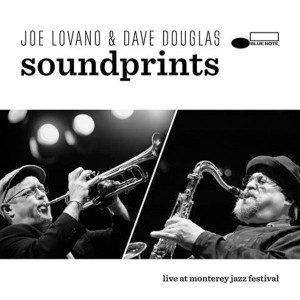 This marvelous, mercurial quintet has been gestating since Joe Lovano and Dave Douglas played in the SF JAZZ Collective in 2008–’09. Its recording debut suggests the group not only has legs, but that it is one of the foremost ensembles in jazz. Inspired by Wayne Shorter—hence the namesake play on his tune “Footprints”—the band specializes in long-form improvisation with recurring motifs and unpredictable twists and turns. Sound Prints also burns hot, swings hard and showcases Lovano’s and Douglas’ unmistakably vivid personalities in a way that pushes it far beyond a “tribute band.”

For this set, recorded live at the 2013 Monterey Jazz Festival, Shorter wrote two tunes on commission flanked by Lovano and Douglas contributions in a similarly open style. It is not always the easiest music to follow—Shorter’s tunes, in particular, seem to just keep growing—but if you ride with it, the views can be magnificent. Case in point: Shorter’s inspirational “Sail Beyond The Sunset,” which has a beckoning, heraldic theme that repeats again and again.

For all its collective interplay, the group offers plenty of solid stretching out. On Douglas’ punningly titled “Sprints,” Lovano tells a long, lovely story with throaty spits and burly growls. Douglas plays with muscular precision, puckishly running up and down ladders, and eschewing the smears and elisions that have marked past playing. Pianist Lawrence Fields, a former Berklee student of Lovano’s, offers sparkling two-handed unisons on Shorter’s “Destination Unknown,” and bassist Linda Oh is warmly propulsive. Throughout, drummer Joey Baron is an explosive participant.

This historic night in Monterey marked the first public performance of the Shorter material, and the fact that the band has gotten even better only suggests that we’ll be hearing more from them. Hopefully it will sooner than the seven years between SF JAZZ and the release of this fine recording.