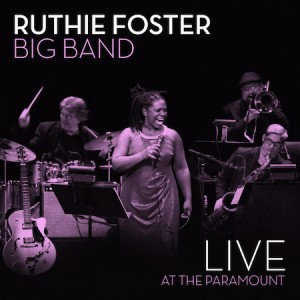 Singer-songwriter Ruthie Foster embodies the celebrated aesthetic of musicians in Austin, Texas, who frequently blend genres in an organic way. Her new album, Live At The Paramount, finds the Americana vocalist fronting a big band that glides through John Beasley’s arrangements in a program that includes Foster’s original tunes alongside gems from the worlds of gospel, blues, soul, country, New Orleans songcraft and the Great American Songbook.

With a three-octave vocal range, Foster knows when to croon and when to belt, whether she’s delivering a completely reimagined rendition of the Johnny Cash hit “Ring Of Fire” or paying tribute to Ella Fitzgerald by spiking “Mack The Knife” with doses of scat-singing. Although 15 musicians and three singers accompany her, Foster’s charismatic voice is so powerful that it remains the focal point throughout the 64-minute program.

The big band’s punchy horns lend a Stax/Volt vibe to a rendition of Foster’s original tune “Runaway Soul,” before the singer engages in a buoyant call-and-response dialogue with fiery tenor saxophonist Joey Colarusso. Other highlights include a tour de force version of “Phenomenal Woman” (from her 2007 album, The Phenomenal Ruthie Foster) and a sweet, swinging stroll through “Fly Me To The Moon.”

The program concludes with waves of the crowd’s boisterous applause reverberating inside the 105-year-old Paramount Theatre, one of Austin’s architectural treasures. During the current pandemic, those recorded sounds serve as a bittersweet reminder of the joy that live performances can generate.