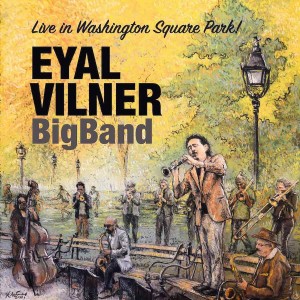 When saxophonist Eyal Vilner’s Big Band sets up shop in a space large enough to hold a throng of dancers, the leader’s goal of brokering the zest of yesteryear swing tunes kicks into gear as the sweep of an audience’s movement begins.

A fetching panache replaces a deep originality in Vilner’s approach, and it’s everywhere on Live At Washington Square Park! As the band moves through nuggets such as “Dinah” and “Let The Good Times Roll,” it saturates the music with a “hey-ba-ba-rebop” ethos that defines the retro pleasure they’re out to deliver.

Vilner’s loose-limbed charts are designed to deliver oomph; animation is just as valuable as precision. The program is built on jump ’n’ jive nostalgia — Vilner originals “Tap Tap Tap” and “Going Uptown” boast a distinct eau de Goodman — but as the players swoop and honk, the power of their social music hits paydirt.

Oddly, the band is most engaging when addressing a jewel of modernism, Bud Powell’s “Un Poco Loco.” The man-bunned boss, a 35-year-old Tel Aviv native who hit New York in 2007, lays a clever arrangement on his squad, and bari player Eden Bareket summons some Serge Chaloff delirium that might’ve had the dancers stopped in their tracks. But only for a moment. Live At Washington Square Park! proves this group’s mission statement is “always keep ’em moving.”