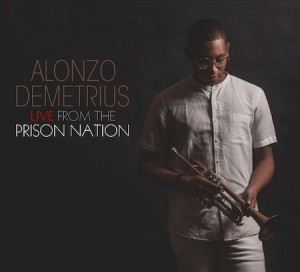 Live From The Prison Nation ranks as Alonzo Demetrius’ leader debut, an album that finds the trumpeter angling for a space somewhere between the smooth and thoughtful tones of Theo Croker, and the driving precision of Christian Scott aTunde Adjuah.

Opening with a vocal sample of Angela Davis outlining the difference between “prison reform” and addressing a system that benefits from mass incarceration, Demetrius details a soothing melody that distinguishes itself from “Expectations’” pensive piano refrain before moving into a funky bridge. A few tracks on, “Mumia’s Guidance”—named for Mumia Abu-Jamal—finds the ensemble offering up a spacey authority, undergirded by bassist Benjamin Jephta and drummer Brian Richburg Jr. The approach enables both Demetrius and tenor saxophonist Yesseh Furaha-Ali to carefully consider their solo spots, never rushing, savoring each successful maneuver and animating the struggle of the track’s incarcerated namesake.

In addition to Live From The Prison Nation introducing its leader to a wider audience, the album also marks the first release from Onyx Productions—helmed by drummer and educator Ralph Peterson—that doesn’t feature its founder. That’s a significant vote of confidence, and the music here seems to bear out the trust Peterson’s invested in the young trumpeter.