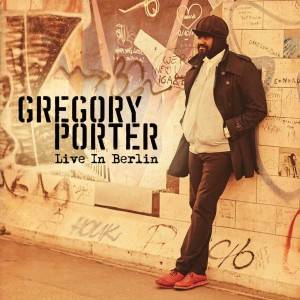 Gregory Porter is a child of the ’70s. Not simply in the literal sense (he was born in 1971), but also to the extent that the sound and sensibility he puts forth on Live In Berlin is firmly rooted in that decade’s best and brightest. He pays tribute to Marvin Gaye and covers “Papa Was A Rolling Stone,” but also manages to swing without ever relying on a walking bass line. Porter understands that you can embrace pop without giving up your jazz bona fides.

Perhaps the best example of this is the album’s opener, “Holding On.” Originally written in collaboration with the English house duo Disclosure, it was a massive and much remixed club hit in 2015. Porter’s own take on the tune is low-key and acoustic but no less soulful, and the ease with which he wins over the German audience suggests that it’s his singing, not the beats, that made them fans.

Still, there’s a definite pop tilt to Live In Berlin. Although the crowd shows enthusiasm when a scat-singing Porter trades fours with saxophonist Tivon Pennicott during “Take Me To Harlem,” they don’t really cheer until “Musical Genocide,” when pianist Chip Crawford dips into “Get Up, Stand Up,” and the biggest reaction Jahmal Nichols gets during his bass solo comes when he quotes “Smoke On The Water.” Perhaps that’s why the video version prefaces the performance footage with interview segments that have Porter describing where in his life the songs came from, a touch that’s more Behind The Music than Jazz Night In America.