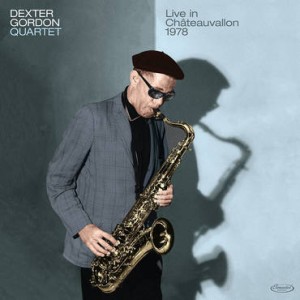 When Dexter Gordon returned to America in 1976 following 14 years spent as an expatriate living in Europe and working with various rhythm sections, he longed to put together his own band. That dream came to fruition when a steady quartet consisting of himself, L.A. pianist George Cables, Chicago/New York bassist Rufus Reid and Newark, New Jersey-based drummer Eddie Gladden settled into place and began gigging extensively at festivals and clubs across the States and overseas.

During a European trip in the fall of 1978, the group appeared at the Châteauvallon Jazz Festival in southern France and put on a thrilling, 110-minute performance, captured here in a deluxe two-disc package. Gordon fans will get tremendous satisfaction from listening to this previously unreleased live material, which presents the tenor and soprano saxophonist at his finest. He comes across like he’s having the time of his life, indulging in favorites like the Jimmy Dorsey hit “Tangerine,” Horace Silver’s “Strollin’,” Jimmy Heath’s “Gingerbread Boy” and the standard “More Than You Know.” True to his nature, Gordon goes quote-crazy during extended improvisations peppered with humor and charged with reverence for the bebop tradition.

This welcome release from Elemental is especially significant for Gordon collectors, as this particular quartet lineup (which only lasted until mid-1979) issued only two official recordings, the 1978 albums Manhattan Symphonie and Live At Carnegie Hall.