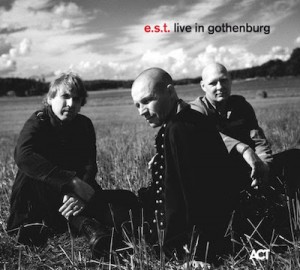 Consider the “new” album from the Esbjörn Svensson Trio, or e.s.t., as another potent reminder of what the jazz piano world has been missing since the poetic master Svensson died in a scuba diving accident at the age of 44 back in 2008.

Similar to the posthumously released live album from London, issued in 2018, but with greater and more persuasive force, Live In Gothenburg offers an enthralling and pristine recording, captured by engineer Åke Linton, of a 2001 concert at the Gothenburg Concert Hall in Sweden.

With its full, varied musical menu and an ample display of the pianist’s gifts, as well as the trio’s intricate ensemble empathy, Live In Gothenburg serves both as a confirmation of reputation and a fine introduction to e.s.t.’s distinctive place in the annals of the piano trio.

During the late ’90s and early 2000s, Svensson, in tight alliance with partners Dan Berglund on bass and Magnus Öström on drums, created one of the crucial models in the wave of new piano trios, in sync with The Bad Plus and perhaps inspired by Brad Mehldau’s group. Clearly, Svensson leads the pack here, but the pack decidedly speaks collectively and interactively.

Ensemble thinking prevails on the opening tune, “Dating,” with its Keith Jarrett-like chordal melody and sculpted dynamics. And on “The Wraith,” tensile telepathy and dramatic structure seem to echo old Pat Metheny Group aesthetics. While rooted in jazz tradition and its attendant offshoots, the trio also easily could lean into prog-rock sensibilities with cheeky titles like “Dodge The Dodo,” an epic, suite-like piece.

That last track features splashy bravura from Öström, while his solo drum turns also can move into subtle, painterly territory as on “The Rube Thing.”

Individually, Svensson manages to display his broad range of musical instincts on this two-disc, 11-track document, from the restless lyricism of “Somewhere Else Before” to the contrapuntal circles he spins around the prelude to “Providence.” But his sensitive balladeering, from the brooding “From Gagarin’s Point Of View” to the elegiac “The Chapel” and the sweet-spirited “The Second Page,” invokes a poignancy from an important musical voice that was stilled too early.