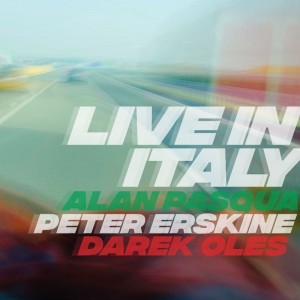 Recorded at the end of a two-week tour abroad in November 2021, Live In Italy opens with Pasqua’s introspective, three-minute solo-piano intro to his “Agrodolce” before Oles and Erskine enter, walking on eggshells on this melancholic gem. Pasqua also penned the lilting “New Hope” and the medium-
tempo swinger “Old Blues,” the latter featuring some hip melodic fills from Erskine, whose own sparsely exquisite “Three-Quarter Molly” culminates in some masterful storytelling on the kit. Oles, a superb soloist, contributes two compositions in the shimmering “Snowglobe” and the uptempo swinger “The Honeymoon,” which finds Pasqua in full-on burn mode and also features some boppish trading between bassist and drummer.