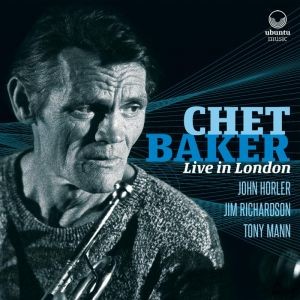 The latest unearthed treasure in the Chet Baker discography comes from the musical archeologists at Ubuntu Music, who in October brought to light a collection of recordings made by the wooly-toned trumpeter during a six-night stay at the Canteen in London. The resulting two-CD set finds Baker, then in his early 50s, in an invigorating partnership with the John Horler Trio—which at the time featured Horler on piano, Jim Richardson on bass and Tony Mann on drums. The recordings, captured on Sony STC audiocassette by Richardson, have been restored with meticulous care and made available for the first time ever. At times fervently funky, at others languorous and lonesome, Live In London is a well-rounded encapsulation of Baker’s late-period aesthetic, with all the worn edges, wispy threads and fragile surfaces intact. Baker is an artist who draws poignancy and strength from the sensuous and soft, and makes meaning of nonchalance. Compiled from a six-night residency, this album adroitly captures Baker’s melodic ingenuity and technical fluency, even as his health continued to deteriorate (he had long been plagued by addictions to cocaine and heroin, and he would die five years later after falling from a hotel window in the Netherlands). As one might expect, the album is replete with quintessential Bakerisms: gentle, curlicue opening lines, velvety subtones, canyons of space, purred vocals. But some of the most revealing moments on Live In London manifest in unexpected places. “Have You Met Miss Jones?” features Baker stacking bulky, dissonant long tones into a cumbersome tower—a strange and beautiful edifice in an otherwise familiar harmonic chord progression. “Margarine,” meanwhile, is an uptempo burner on which Baker seems to meld two solos simultaneously: one pointedly modern and cathartic, the other boppish and logical. The friction and eventual synthesis of the two is bracing. As stimulating as it is to hear new strains in Baker’s work—especially at such a late point in his career—it is equally comforting to hear him return to the touchstones of his catalogue. A sweeping rendition of “My Funny Valentine”—taken deliberately, with Horler’s piano chords landing like leaves on a pond—is as heartwarming as ever.