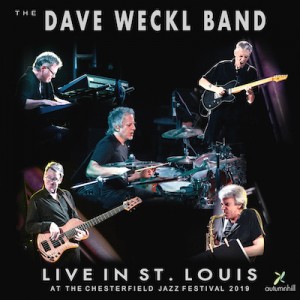 Dave Weckl returned to his hometown of St. Louis for a reunion performance with fusion guitarist Buzz Feiten, bassist Tom Kennedy and keyboardist Jay Oliver — all of whom appeared on his 1998 album Rhythm Of The Soul— at the 2019 Chesterfield Jazz Festival. Tenor saxophonist Gary Meek, a collaborator since 2003, added Michael Brecker-like heroics to the proceedings. With uncanny tightness, they collectively steamroll through a program of exhilarating jazz-funk fusion, including the smokin’ “Big B Little B,” the driving, organ-fueled jam “101 Shuffle” and the molasses-slow second-line number “Mud Sauce,” all of which appeared on that original Weckl outing more than 20 years ago.

Weckl showcases his legendary chops and mastery of beat displacement on the funky “Tower ’99,” a slowed-down version of his Tower of Power tribute, “Tower Of Inspiration,” which appeared on his 1990 solo debut, Master Plan. And he pulls out all the stops on the heavy-duty fusion number “Access Denied” (also from Rhythm Of The Soul), which has him traversing the kit with the kind of precision fills that have earned him legions of fans in the drumming community.