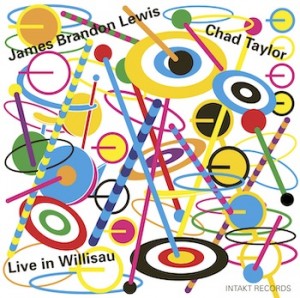 There is a particular charge when tenor saxophonist James Brandon Lewis and drummer Chad Taylor play together. Their 2018 duo release, Radiant Imprints, was a master class in Lewis’ impeccable, breathless form, rattling off endless melodic lines atop Taylor’s textural rhythms.

The pair’s subsequent release, the 2019 concert recording Live In Willisau, is just as virtuosic and no less formidable. Recorded in Switzerland at Jazz Festival Willisau—on the same stage as historic performances from the likes of Dewey Redman, Ed Blackwell and Ornette Coleman—the duo’s nine-track show is as indebted to its forebears as to opening up new avenues of expression.

Lewis is typically chameleonic in his approach, switching at a moment’s notice from straight-laced swing to swampy blues riffs and then coruscating, reed-testing runs. And all of this in just the opening two numbers, “Twenty Four” and “Radiance.” The latter especially traces the duo’s influence from the likes of groundbreaking drums-and-sax pairings—such as John Coltrane and Rashied Ali with its reworking of their tune “Seraphic Light”—while “Willisee” later pays tribute to Redman and Blackwell in its hard-swinging, shuffling kineticism, ending in Lewis’ ecstatic shouts of approval. As the crowd’s applause displays a welcome appreciation for this duo’s relentless pursuit of creativity, it’s clear that Lewis and Taylor are perfectly channeling the rawest edges of their instruments: They’re a sharp burst of light to behold live and a necessary continuation of the emotive power of jazz’s free-form potential.