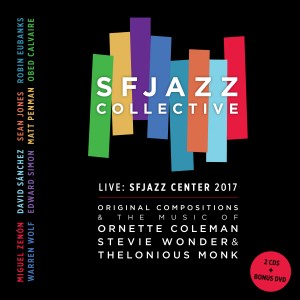 Charged annually with new commissions and reinterpretations of modern classics, this double disc by SFJAZZ Collective leaves little doubt innovation and tradition simultaneously are alive and well on the West Coast.

Alto saxophonist’s Miguel Zenón’s “Tidal Flow” ripples with horns and vibraphone in sync, then morphs into something more urgent. It’s an indicator of the assembled players’ breadth, whether on the soaring “Give The Drummer Some,” penned by vibraphonist Warren Wolf, or “Living The Questions,” a transcendent piece composed by tenor saxophonist David Sánchez.

Disc two is devoted to Thelonious Monk, Ornette Coleman and Stevie Wonder. Monk’s “Criss Cross” is a pianist’s showpiece, and yet, everyone keeps pace with the playful notes, from Matt Penman’s restrained bass to drummer Obed Calvaire’s locked rhythm. Coleman’s “Una Muy Bonita” doesn’t fail to please, its sweetness in all the right spots, while “When Will The Blues Leave” is a reminder of what the generous composer left behind. Wonder’s repertoire would be a jubilant finish to any show, though the rendition of “Superstition” begins darker than its original intent. But by song’s end, it reaches ebullient heights.

Less tribute and more testament to the pliability of Wonder, Coleman and Monk, this iteration of the SFJAZZ Collective showcases an ensemble that stretches from here to there and back again, without ever breaking a sweat.