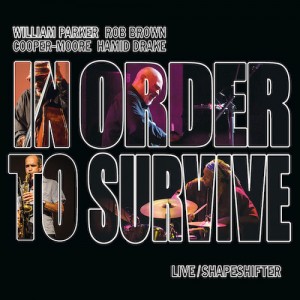 Bassist William Parker’s In Order To Survive formed back in the mid-’90s, and although a number of horn players have passed through the group, the combo always has featured alto saxophonist Rob Brown and pianist Cooper-Moore, both mainstays in other Parker ensembles. Drummer Hamid Drake has been playing with the bassist for more than two decades in different configurations, and long ago they established themselves as the most voluble rhythm section in free music. On this double-disc set, recorded live at New York’s Shapeshifter in July 2017, the pair extend, compress and explode time in endlessly simpatico ways—a fulcrum of motion that provides Brown and Cooper-More plenty to dig into.

The first disc features Parker’s five-part suite, Eternal Is The Voice Of Love, which toggles between heavy grooves and ecstatic supernovas of emotion. The rapport and intuition of Parker and Drake allows them to morph into a single organism with four limbs, constantly realigning rhythm and shifting tempo. The muscularity and assurance of their fluid armature requires quicksilver reactions from the other players. Brown rides atop like a seasoned surfer, gliding and cutting back against the grain with a gorgeously tangy tone. The second disc features avuncular chants from Parker, bringing a more earthy spirit to the proceedings, as well as “Newark,” a strutting gem dedicated to trombonist Grachan Moncur III, an early member of the group.

Parker believes in the transformative power of this music, but as a listener, there are times when the unrelenting drive numbs more than it uplifts.

Live/Shapeshifter: Disc one (Eternal Is The Voice of Love): Entrance To The Tone World; Color Against Autumn Sky; If There Is A Chance; A Situation; Birth Of The Sunset. Disc two: Demons Lining The Halls Of Justice; Drum And Bass Interlude; Newark (For Grachan Moncur III); In Order To Survive; Eternity. (52:12/58:10)
Personnel: William Parker, bass, shakuhachi, vocals; Rob Brown, alto saxophone; Cooper-Moore, piano; Hamid Drake, drums.