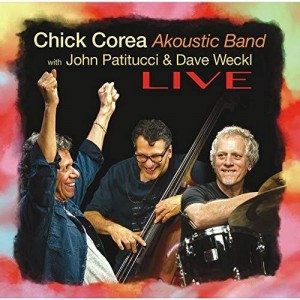 It’s tempting to say that Chick Corea’s Akoustic Band picks up on Live right where they left off 20 years ago. But the truth is, they never stopped playing together. Bassist John Patitucci and drummer Dave Weckl were also the rhythm section of Corea’s complementary—and regularly working—Elektric Band, thus the creative chemistry between band members was as strong as ever during these recent live sets.

“Japanese Waltz,” in Corea’s book since at least 1984, gets treated with all the thrill of a brand-new tune, with the pianist and Weckl enjoying a push-and-pull tension as Patitucci turns in a thematic solo. They apply the same relish to Corea’s “Humpty Dumpty”—which appears on each of the album’s two discs, each time with new invention—and even to well-worn standards like “That Old Feeling” and “On Green Dolphin Street.”

Ballads, meanwhile, are greeted like old friends. A long and unaccompanied piano decoration of “In A Sentimental Mood” stretches far from Duke Ellington’s melody, yet contains enough allusions to it (and titular sentiment) to come off as reverent. The closing “You’re Everything,” featuring Corea’s wife, Gayle, on vocals, finds both Coreas gently teasing the tune out of their instruments.

In short, Live finds the Akoustic Band sounding as good as they always did. As it was Corea’s final album before his untimely death in February, there’s comfort in knowing he was on top of his game to the last.