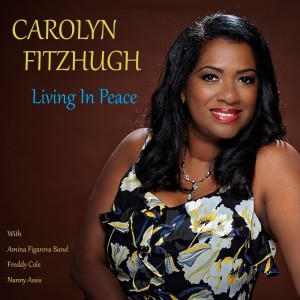 Carolyn Fitzhugh wraps her versatile voice around heartfelt originals and intriguing covers—not all on the mark—on Living In Peace, her sophomore album. Bracketed by a sparkling take on Average White Band’s charmingly dated “Queen Of My Soul” and the ballad “Alone In The World,” the disc’s 12 tunes effectively cover a pop-music waterfront based in the ’70s and ’80s.

What’s admirable about this easygoing album is its eclecticism. Not only has Fitzhugh eschewed the Great American Songbook, keyboardist Amina Figarova has come up with diverse arrangements and recastings, spanning the shimmering rendition of Gil Scott-Heron’s “Combinations” and the bright arrangement of Johnny Pate’s “Yes I Know When I’ve Had It.” An alto flute solo by Bart Platteau and Wayne Escoffery’s tenor lend the Pate tune some drive and body.

The Chicago-based singer can be too enthusiastic, however. Her rushed reading of James Taylor’s “Secret O’ Life” turns the relaxed original jumpy, and she flattens the arch, androgynous wit of Prince’s “Strollin’” into something more busy than urgent. But originals, such as the upbeat title track and the ebullient “Once Upon A Lover,” are endearing, and her duet with boudoir-voiced Freddy Cole on “I’m Not Alone (Anjo De Mim)” is just haunting.

Despite a few missteps, Living In Peace presents a singer of taste and range, and showcases her confidence and daring alongside notable contributors like guitarist Rez Abassi and drummer Rudy Royston.