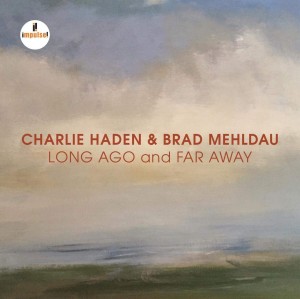 Bassist Charlie Haden (1937–2014) and pianist Brad Mehldau had known each other for about 14 years when they were invited to perform a duo concert at the Christuskirche church in Mannheim, Germany, as part of the 2007 Enjoy Jazz Festival. The resulting live recording is finally seeing the light of day as Long Ago And Far Away, and it’s a testament to the simpatico that existed between these two exemplary, groundbreaking improvisers, who were cut from similar cloth but born generations apart.

When Haden and Mehldau met in 1993 at a festival in Pennsylvania, a bond of friendship and mentorship instantly was formed. They subsequently performed together with saxophonist Lee Konitz at Los Angeles’ Jazz Bakery in 1996, and in 1997 the trio made a recording for Blue Note called Alone Together. But Haden and Mehldau had never performed as a duo prior to the concert that ultimately yielded this long-awaited CD, whose release was held up because of contractual reasons. The bassist and pianist stroll through the program of six standards (“Au Privave,” “My Old Flame,” “What’ll I Do,” “Long Ago And Far Away,” “My Love And I,” “Everything Happens To Me”) engaged in perpetual conversation, acknowledging the familiar melodies but improvising all the while—detouring, modulating, quoting and meandering. By taking their time and embracing an open-minded aesthetic, they discover new paths, rather than following established routes, letting their ears and their hearts lead the way through material deeply ingrained in their memories. Interacting in the hallowed space of an art nouveau cathedral, rapt with mutual respect and admiration, these one-time soul mates achieved a true state of grace.