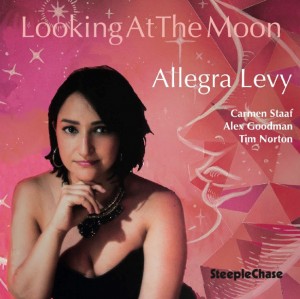 On this 58-minute disc, nearly all of the tunes have the word moon in the title. One exception is the closer, “I’ll Be Seeing You,” the lyrics of which supply the album with its title: Looking At The Moon. Levy’s previous two albums focused on her original compositions, but this outing is all about enlivening the classics. The opening track, Levy’s arrangement of “Moon River,” is surprisingly fresh and offers a different tempo than some of the famous renditions of this Johnny Mercer/Henry Mancini classic. Bassist Tim Norton’s arrangement of “Moon Ray” provides an ideal setting to showcase Levy’s graceful phrasing and nuanced, less-is-more delivery, as well as her skills in scat-singing.

On this 13-track program, lovely, carefully sculpted versions of Neil Young’s “Harvest Moon” (1992) and Cat Stevens’ “Moonshadow” (1971)—as well as an adventurously creative reading of Nick Drake’s “Pink Moon” (1972)—fit nicely alongside standards from the 1930s and ’40s, such as “Moonglow,” “Moonlight In Vermont” and “I Got The Sun In The Mornin’.” Thanks to the exquisite musicianship of Levy and her band—Norton, pianist Carmen Staaf and guitarist Alex Goodman—the concept behind this album doesn’t eclipse the artistry. In lesser hands, this project could have felt like a contrived effort to fulfill a flimsy theme. Instead, it’s a cohesive set of excellent performances that will inspire listeners to take a meaningful glance up at that shining orb with renewed wonder.